I'm sure you've heard of The Great Resignation by now. You may have also heard of the fast-growing Reddit thread called r/Antiwork and it's role as a gathering place for those having quit or considering quitting. If you haven't, I'll give you a quick background.

There has been record numbers of workers quitting their jobs resulting in what many people are calling a "labor shortage". Many companies have complained they can't find workers to fill open positions resulting in lost revenue, worsening service, and further strain on the existing employees.

Alternatively, workers continue sharing stories of how they have been ghosted by employers. One man even applied for 60 entry-level positions to only get a single interview which people have pointed to as a rebuttal to companies complaining of no worker availability.

So why are people quitting? What is causing the sudden shift? Is there a labor shortage or a lack of acceptable job openings? Let's dive into it a bit deeper below.

How many times have we heard, "When I was your age I made $1.45/hour and paid for my college tuition! You shouldn't be so picky about your job!". Let's ignore the college tuition component and look only at the wage comparison.

Would you be upset if your wages were 30% lower than they are right now? I would sure hope so.

Ok, ok. Maybe it's that with cell phones and social media workers are simply less productive than they used to be and shouldn't be paid as much. They are goofing off on the job and aren't worth the $10.25/hour workers received in 1970. 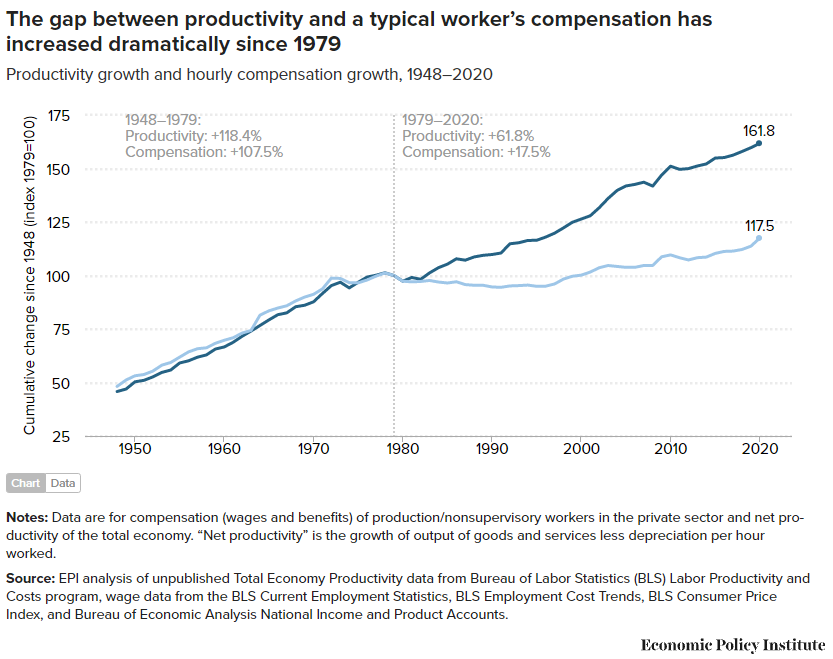 So much for that theory. Wages are up 17.5% since 1979 compared to a productivity increase of 62%2. So real wages (factoring in inflation) are down 30% since 1970, while productivity is up double digits meaning more and more profits aren't going to workers but to owners and investors. This alone may not make workers leave, but it surely makes workers ask some tough questions. Let's keep looking further into this.

The beauty of the free market system is that supply of a given item dictates its value (which is why monopolies and conspiracy between companies are so frowned upon). What we have all forgotten for years and years is that labor has a supply and demand market just like any other commodity. The population has been increasing since the founding of this country so there has been a supply of labor that exceeds demand. We've always seen more competitive job markets, not competitive labor markets.

Population growth has slowed down considerably and is nearly flat3. Between the many reasons young people don't have children, deaths from COVID, and an aging population, the labor market is getting tighter. For the first time in most of our lives, companies are having to compete for workers instead of workers competing for jobs. A Canadian restaurant even listed a dishwasher job as having a $50K salary!

Without getting into a full-blown economics lesson, the less of something there is, the higher the price for that product or service. You, as a worker, offer your service of labor/skillset to employers and now that resource is scarce so they must offer a higher price for it. Many workers are realizing that and quitting their $7.25 jobs to hold out for that higher paying gig.

Unions have widely been eliminated from the US economy as many employers rallied against them. It is difficult to negotiate against an entire workforce but it is easy to negotiate with individual workers. One worker leaving is unfortunate, the whole workforce leaving is catastrophe.

Workers have found a way around this by putting together ad hoc unions that can't get a seat at a negotiation table, but they can act collectively. This is what is being done on the popular Reddit thread r/antiwork. Many workers have come together to share the ways they have been treated by employers or to get advice on how to react to situations they have been put in. They are even sharing compensation and benefit data using specific criteria such as position, field, credentials, position, experience, and region.

A lot of the dialogue revolves around interactions with employers. It's a common sight to see a post like this:

Reddit has become a gathering place for people to work together against larger establishments. We saw this back with the Gamestop trading saga and are seeing at again with The Great Resignation.

Workers have been getting paid less for doing more work and are struggling to make ends meet. In fact, their earnings are so little compared to the cost of living that they often won't be much worse off if they simply quit their jobs. It doesn't make sense for people to spend so much time and deal with poor treatment from employers to struggle to even pay bills. Some are waiting for a better opportunity while 32% of quitters are starting businesses4.

Our theory behind this is that workers only see upside by going out on their own. Benefits from companies are so meager for many workers that the risk of starting your own business is very attractive. If you're behind on bills by two months, what does it matter if your business fails and you're now behind by 6 months? The upside far outweighs the downside, especially when considering how much more a company takes from a worker's productivity. It's not that people don't want to work, it's that people would rather experience poverty with free time than poverty without it.

While many people see all of this is a negative, anti-business shift, the reality is that it will likely shake the labor market for a short period of time before things return to an equilibrium. Wages will have to increase, workplace conditions will have to improve, and more of a focus on personal life than work life will be the norm. Company profits may dip slightly as wages are increased or company's will decide to send their jobs overseas where labor is already cheaper than it is here. Workers will return to work when it is attractive enough to do so.

Overall, we see this as a healthy, free-market occurrence in which companies have taken too much from workers and so workers refuse to continue giving to companies. There is a labor shortage, but not a worker shortage. Workers are refusing to provide their labor until wages are commensurate. Like any other supply/demand relationship, the market will shift to accommodate the imbalance.