There is a general understanding that getting married (beyond all the obvious reasons for getting married) often helps with your tax situation. Tax deductions, increased tax brackets, and other perks often make it worthwhile. I would feel comfortable saying it USUALLY makes financial sense to go ahead and tie the knot, but here are a couple reasons you may want to hold off on the nuptials or decide to file separately.

Both Partners are VERY High Earners

If you and your partner both make serious money you may want to stay single for tax purposes. If you look at the tax brackets below, you may notice that most of them for married filing jointly taxpayers are simply double that of the single tax payer. That's true...until the last couple brackets! 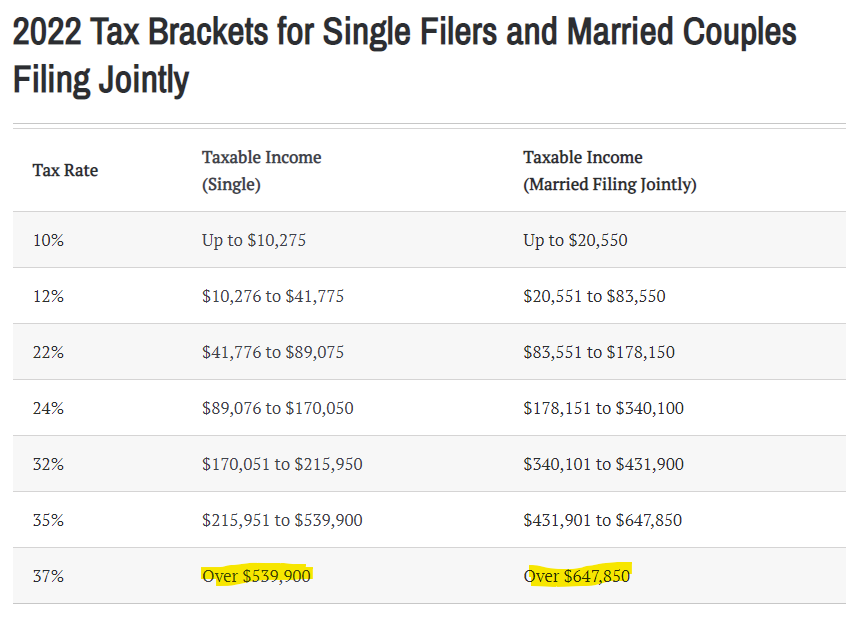 So let's take a couple in which each partner makes $750K for a total of $1.5M. I'll save you the details of the math but if they got married and filed jointly, they would pay roughly $510K in federal income taxes (consult your tax advisor as there are numerous variables that may impact these numbers). If they remained single and filed as such, they would each pay about $241K in federal taxes totaling $482K. That's a savings of $28K...per year!

One Partner has Medical Expenses

Medical expenses in this country are completely out of control and that sometimes means they can make a considerable dent in our income. The bone the government has thrown taxpayers is the ability to deduct medical expenses if they are more than 7.5% of your adjusted gross income. If one partner has medical expenses that are 7.5% of their own income, but not 7.5% of their combined income, it may make sense to remain single or file separately.

Of course, there are other factors involved in filing using different methods, so make sure to consult your tax advisor (as always!).

One Partner is on a Student Loan Repayment Plan

Millennials become acquainted with large levels of debt early on in their lives as many have been saddled with student loan debt. This is particularly troublesome for professions that require advanced degrees such as teaching, therapy/psychology, social work, among others. The issue with those career paths is that they often aren't the most lucrative so teachers and social workers have six-figure debt with lower income. For that reason, many people in those careers are in income-based repayment programs.

In this instance, it may make sense to stay single or file separately. Take a teacher making $60K per year who has $150K of loans paying back $550/mo. The teacher then marries a software engineer who makes $240K per year. Instead of the teacher's loan payments being calculated on $60K, they're being calculated as if they were making $300K! The payment could increase by $1K per month or more and nullify (or worse) any tax benefits of filing jointly.

I'll say it one last time that taxes are a complex that can be impacted by many variables so you should talk to your tax advisor before running off and filing separately this year.