The ability to buy a house is a pillar of the American Dream. For decades, homeownership has symbolized moving up in society and in wealth. Homeownership has been touted as one of the primary drivers of wealth growth, as well. But is all that coming to an end?

A bubble describes a scenario in which too much hype has gathered around an idea or investment that makes the hope of appreciation far larger than the concern of losing money. When that hope evaporates, so do prices of that investment. But I don’t believe we’ve lost hope in housing. Many of us still want to buy a home and we know that there is a shortage to the tune of millions of units in this country. Especially with so many houses being bought as investment properties.

More headlines come out every day and have been for the last few weeks stating that we’re in a housing bubble and it’s soon to pop, but my hypothesis is that it’s worse than that. We’ve been experiencing monetary policy that encourages home price appreciation since the Volker era of the early 1980s (the period after he wisely rose rates to reset the economy). I set out to see how closely housing prices were related to interest rates, specifically mortgage rates.

I’ve reviewed quarterly data for both median home price in the country and the 30-year fixed term mortgage from 1971-2021. I like this time period because it’s the most recent 50 years but also because we’ve seen both increasing and decreasing rates in this period which allows us to get both perspectives on price.

I’ve adjusted median home prices for inflation and everything is represented in 2022 dollars so the prices would be described as real price growth as opposed to growth caused by inflation. 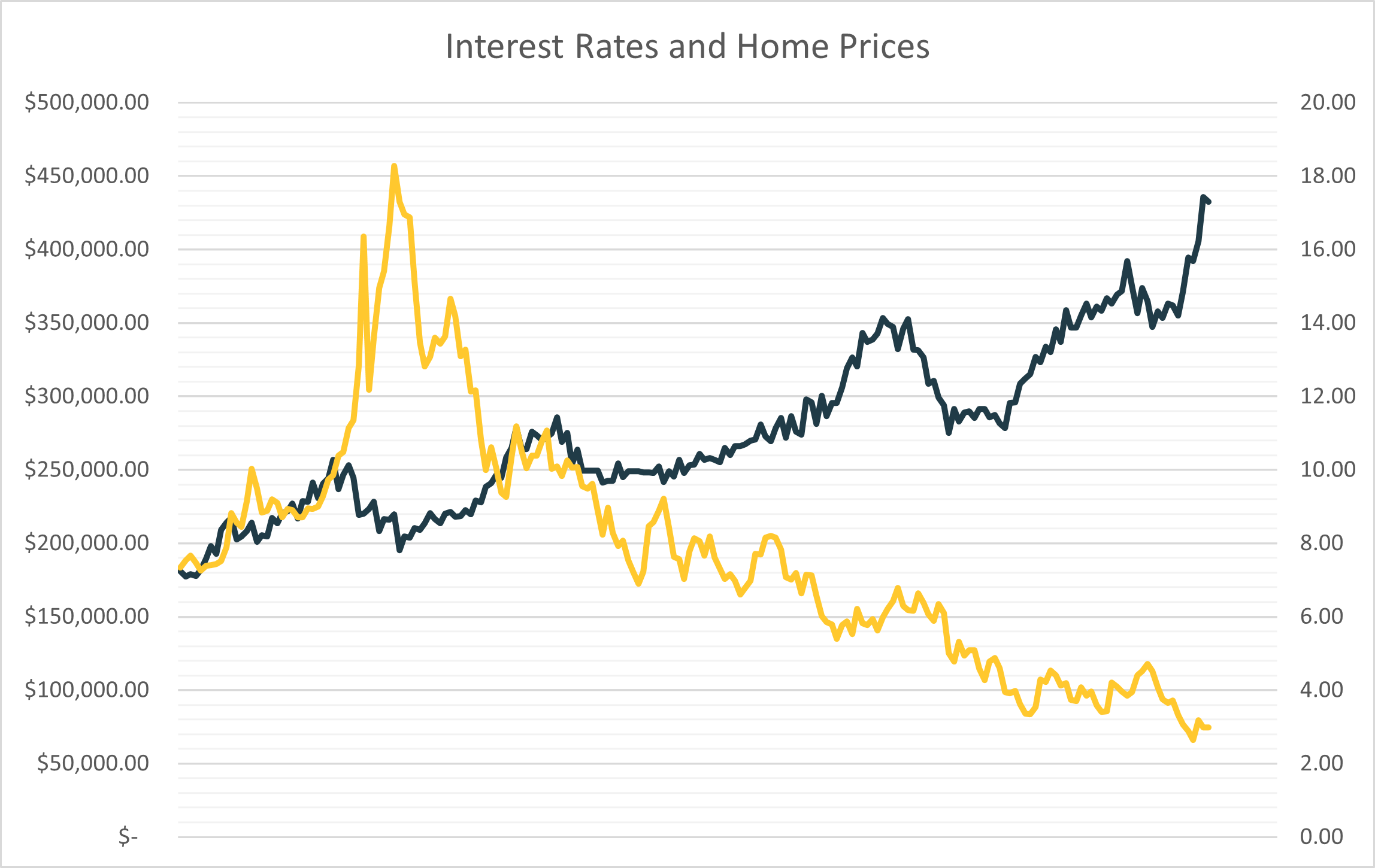 Median home prices adjusted for inflation are in the very dark blue while interest rates are in yellow.

It’s staggering to be able to visually notice the inverse relationship between interest rates and home prices. As rates rise, prices drop and vice versa. This is what is called a negative correlation, but the important factor is how STRONG the negative correlation is. Anything between -.7 and -1 is considered a strong and meaningful relationship between two variables.

I calculated the correlation and it is -.743 meaning that home prices and interest rates are significantly negatively correlated and though I don’t have data to prove it, I would bet they also have a causal relationship.

So what does this mean for the housing market? It means that we are entering an era where rates are almost destined to increase a moderate amount and so housing prices are likely to be noticeably impacted. Whether that means stagnation in the price or actual price contraction is unknown, but the behavior we have seen in housing the last 40 years is set to end.

This isn’t just a bubble popping. This is a change to the way we’ve been experiencing real estate prices for about 40 years. Homes won’t be a primary driver for growth in the coming years, but that could change again before too long. The question is, are we ever going to see a housing boom like we’ve seen since the 1980s again?